The study of the EnVision mission to Venus is advancing fast. On April 15-16 there was an important meeting involving the international NASA-ESA Science Study Team, the instrument Principal Investigators and the System Engineering Working Group.

The meeting was focused on the discussion of  science goals and critical mission issues. It was held at the European Space Research and Technology Centre (ESTEC) of the European  Space Agency in Noordwijk (The Netherlands). 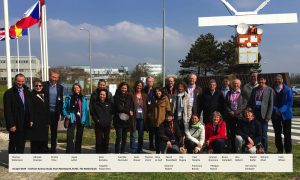 RSLab  has the role of Principal Investigator (Lorenzo Bruzzone) of the Subsurface Radar Sounder (SRS) and is involved in the NASA-ESA Science Study Team (Francesca Bovolo) of the mission.

For more information refer to envisionvenus.eu